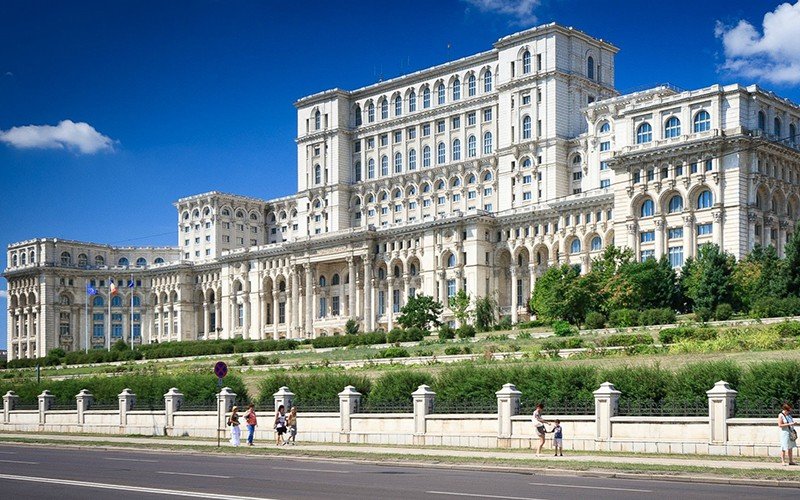 The Palace of the Parliament, also known as People’s House (Casa Poporului), is a wonderful tourist attraction for those who are visiting Bucharest. It has a rich history and many hidden secrets, which might not be mentioned by your tour guide. Are you curious to find out what those are? Keep reading about this very extravagant and expensive administrative building.

The construction work for the Palace of the Parliament started in 1984 and the initial estimates for completing the building were for 2 years, but the deadline was afterwards extended until 1990. Unfortunately, the building hasn’t been completed not to this very day. Even though this is one of the most admired and talked about construction in the world, out of its total 1,100 rooms only 400 chambers and 2 meeting halls are finished and suitable for use.

This is one of the most expensive buildings on the planet and it includes 4 underground floors and 2 fallout shelters, especially designed by Nicolae Ceausescu who was much scarred of a possible nuclear war. In a way, his worries were justified, considering that the project started during the Cold War.

The Ex-Dictator was worried about something else as well, maybe more than the atomic bombs- the people’s revolution. This is why he included underground tunnels, which were designed to get him safe to the Otopeni airport, from where he could have escaped from the rage of his people.

The engineer, Traian Popp, who worked on the construction site, claims that there really exists a tunnel which connects the basement of the Palace of the Parliament and the subway, somewhere between the stations Izvor and Politehnica. Still, there is no secret subway that goes to Otopeni, says Popp.

For completing this enormous project, on the construction site there were between 20,000 and 100,000 men who worked sometimes even in 3 shifts to get the work done. Plus 200 architects who were initially coordinated by Cezar Lazarescu.

Only a few tourists know the sad story of the chief architect. His house was demolished to make room for the new boulevard Victoria Socialismului, just like the neighborhood Uranus was also demolished, and 57,000 families were forced to move out. Cezar Lazarescu could not live with the idea that he lost his house and this lead to his death, caused by a stroke. His place as a chief architect for the project Palace of Parliament was taken by Anca Petrescu.

The workers from the site also left numerous stories behind them. Some might seem funny while others might give you goose bumps. There are many messages left on the walls of the building saying: „Maria + Casa Poporului“ or  „AMR (days left) 197, 196, 195 “. The documents confirm that many workers died here, on the greatest construction work that Romania has ever had. The records show that 27 people died as a result of a work accident, but there are also rumors about killed workers, to keep the secret about some hidden tunnels or secret rooms.

Anca Petrescu, one of the chief-architects denies these rumors claiming that when a worker died, the military prosecutors conducted a thorough investigation looking to identify a responsible for the accident. This means that the disappearing of an employee wouldn’t have been lightly dismissed. But above of the endless rumors and legends, the Palace of the Parliament remains an important tourist attraction. It is the world’s largest administrative building, after the Pentagon, measuring 84 m high, 360,000 m2 square area and having 23 different wings.

In 1190, the Australian American business magnate Rupert Murdoch wanted to buy the building for 1 billion dollars, but his offer was refused. Today, the Palace of the parliament is evaluated at 3 billion euros.