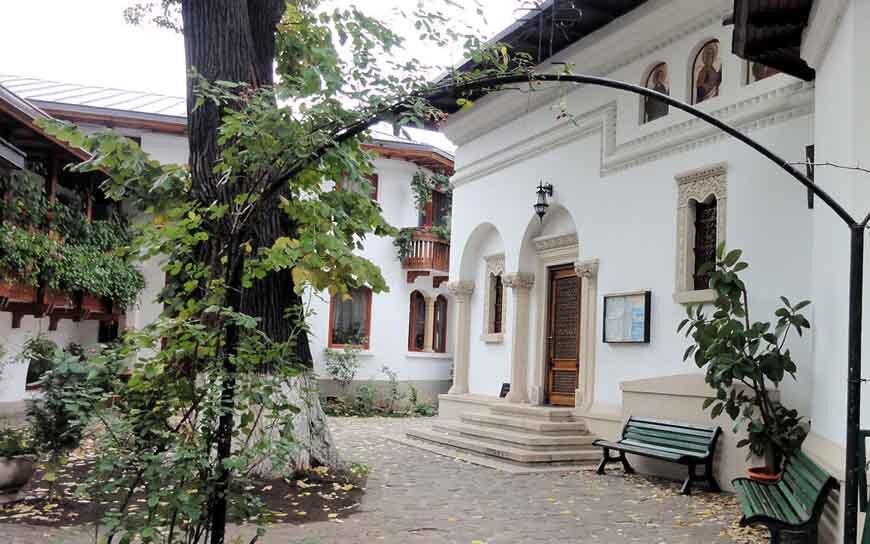 Right in the center of Bucharest, where you can hear the city beating there is a small oasis of quietness. Here you can feel serenity, faith and get a bit closer to God. The name of the place is Darvari Hermitage. This is a place that has nothing to do with the hectic urban set. It is actually very similar to the remote monasteries where you usually go to hear the call of your spirituality. The locals are very familiar with this sanctuary and more and more tourists discover its uniqueness every year.

Between old houses, embassies and beautiful architecture there is the Darvari Hermitage. To be more exact, next to “Gradina Icoanei”. As soon as you walk inside, you step into another world. Here, time stays still, belief takes over and you experience another pace of life. It is a monastery in the center of the busiest city in Romania, a calm area surrounded by rush and noise.

The hermitage was built in 1834 by Mihail Darvari and his wife, Elena, born in the Buzesti family. The worship place was made of wood, it didn’t have a tower and its patrons were Saint Lazarus, the Saints Constantine and Helen and the Holy Archangels Michael and Gabriel. The small church was constructed as a praying place for the family and their friends. The founders have also built the stone walls, sanctums, and in 1835, 12 nuns were brought to the hermitage to form its first monastic community.

Between 1989 and 2002 the hermitage was the subject of intensive restoration works. Its beautiful paintings were deteriorated due to the abundance of smoke used during the communist period, the sanctums were also in a poor shape and the bell tower was unusable. Following the original architectural plans, Darvari Hermitage has been restored to its original conditions. Now the worship place is opened to visitors and it is a wonderful monastic setttlement where you can admire church architecture, mural paintings, enjoy tranquility and discover a little bit of history.

This sanctuary is the work of art of the renowned architect Nicolae Vladescu. It is a complex construction which includes 9 sanctums, the refectory, the bell tower, a shop and a small prayer chapel. Since 2007, the abbot of the Darvari monastic settlement is the archimandrite father Teofil Anastasoaie.

On 8 November 2011, at the celebration of the second patrons of the church, the Holy Archangels Michael and Gabriel, Patriarch Daniel has held a special ceremony for blessing the church’s paintings, iconostasis and the new silver reliquary where there are kept small parts of holly relics. The silver reliquary was made in the Romanian Patriarchate’s workshops.

If you want to discover a unique place in Bucharest’s modern setting then you should consider visiting Darvari Hermitage, a holly destination with a rich history. Here every step unveils amazing architecture, religious art and a return to spirituality.

Share on FacebookShare on TwitterShare on Linkedin
Tags
Attractions History