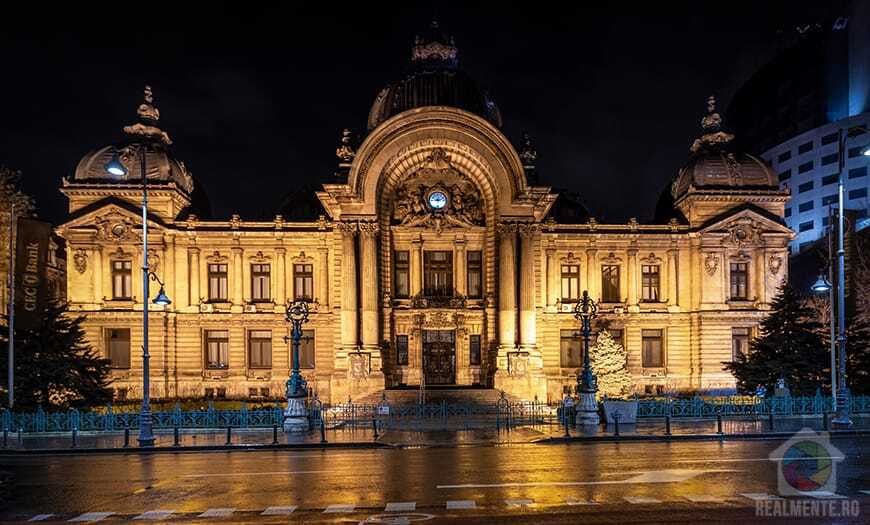 When you visit Bucharest for the first time, they will undoubtedly tell you to start your tour with Calea Victoriei and with good cause. Calea Victoriei is one of the oldest avenues in Bucharest and is dotted with centuries-old buildings in various architectural styles. The CEC Palace is probably the most amazing among them, so please take your time to walk around examining its most impressive architectural features and, if it is open, don’t waste your chance to go inside and admire the elegant decorations.

The history of the CEC Palace

The CEC Palace was built between 1897 and 1900 on the grounds of an wooden monastery, built by the Romanian leader Michael the Brave back in the 17th century. While the church was famous for its miracle healings, in the second half of the 19th century it fell into disrepair and was eventually demolished.

The land was bought by the oldest bank in Romania, Casa de Depuneri, Consemnațiuni și Economie (established in 1864), that later became known as Casa de Economii și Consemnațiuni, or simply CEC. It was a significant enough moment that King Carol I and Queen Elizabeth were invited to lay the foundation stone of the new headquarters of the bank.

The period of the late 19th century to the early 20th century was one of intense modernization of the country, a trend also reflected in architecture, vastly influenced by the French style. At the time, the Romanian capital prided itself with the name of Little Paris, as, of all the other Romance language countries, Romania was always closest to France.

As a matter of fact, the plans for the new CEC Palace were created by a French architect Paul Gottereau, whose work can best be described as academism, that is following the standards imposed by the famous French Academie des Beaux-Arts, which also incorporated Romanticism and Neo-Classical elements. If you like the CEC Palace, look up other houses built by Gottereau around Bucharest.

The palace was inaugurated in 1900 and to this day still houses the headquarters of the CEC Bank.

What’s so special about CEC Palace

As you stand in front of the imposing building your eyes will be drawn to the elegant facade, with the four white marble columns guarding the entrance to the palace. They could have easily afforded to import foreign materials, but they chose to do them with white marble from the Dobrogea region in south-eastern Romania. Right above the entrance there’s an ancient clock, but pay attention to the statues on its sides. On the left there is the statue of the Greek god of commerce, Mercury, while on the right there’s Demeter, goddess of fertility and riches. Both statues are made in white stone.

However, the most important feature of the building is the central glass and metal dome, flanked by smaller domes in the four corners of the building. These domes are testimony of the Renaissance influences in Gottereau’s art. The four corners of the palace are decorated with gables and various coats of arms. If you want to have a better view of the magnificent central dome and admire the sunlight filtering through the glass panels, you should definitely see the inside of the palace.

The riches inside the CEC Palace

No, not the money inside the bank’s vaults. The interior decorations are more precious than the money in the bank and have survived many changes in the country’s monetary policy.

The interiors of the palace are largely based on Gotterau’s ideas. In the main hall there’s a huge mural depicting Fortuna, Roman goddess of fortune and personification of good luck. In the mural, the goddess can be seen offering gifts.

The walls of the main hall were also decorated with the portraits of King Carol I, Queen Elizabeth, King Ferdinand and his wife Queen Maria.  After World War II, when the communists came to power, the royal portraits were covered with paint. The portraits you can now admire on the walls were painstakingly recreated after the 1989 revolution.

One room that the communists left untouched is the Council Chamber, still in use today, and it’s hard to believe many other banks in the world have such a luxurious setting for their board meetings.

The Council Chamber is 8 meters (26 ft) tall and its walls are covered with hand-carved precious wood. On the upper part, the walls are decorated with panels in green silk bearing floral motifs. You probably won’t get access to this room, but there’s plenty of other things to admire in the other parts of the palace. Take a look at the paintings or the beautiful sculptures on the walls, or look up to the splendid metal lamps that illuminate the hall.

The permanent exhibition was inaugurated in 2003 and it’s not just about money, but also about the bank’s history. The exhibition, located in the main hall, presents old documents relating to bank transactions, medals and pins, as well as collection of postcards and old flyers promoting the bank’s activity. You might also like the old safes and piggy-banks, some of them dating back two centuries ago, when, ironically, people preferred to keep their money at home rather than the bank.

Many Romanians feel its a miracle the CEC building survived unscathed by the appetite for destruction that characterized the later years of Nicolae Ceausescu’s regime. In the 1980s many buildings in Bucharest were laid to the ground, irrespective of their historical value, just to make way for the dictator’s megalomaniac projects. For some reason,  CEC was allowed to function as a savings bank throughout the communist years, when there were no other banks open to the general public.

And the CEC Palace also survived the terrible bombardments during WWII as well as two devastating earthquakes, with only minor damage, which says a lot about the strong foundation of this impressive building.